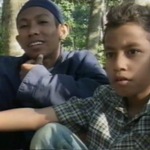 ‘I was born in November 1986. My mother died in 1996 when I was in the third class of the elementary school in Tibar, near Dili. One of the teachers at my school was Mr Budiato from Indonesia. Because we were poor, he invited me to live with his family, doing jobs for them and helping to mind his young daughter. In exchange he paid my school fees. As the time for the referendum in 1999 approached Mrs Budiato was afraid, so Mr Budiato took his wife back to their home in Magelang in Java. Not long afterwards he said that if I wanted to be safe I should go with him to Java. He said that I could continue living with his family and they would help me with school fees. He said that when it was safe in East Timor I could return home.

About three weeks before the referendum he took me to Dili to get ready to take the boat to Java. At the harbour we met up with a woman and three children; two of the children were a brother and sister from Ermera. Mr Budiato gave me Rp200,000 saying it was to buy books and shoes. Then he left, promising that he would return before the boat left to give me the address and telephone number of his wife in Magelang. He told me that when I arrived I should contact her and she would arrange to meet me. However, he never came back and since then I have never had any contact with him. I travelled to Java with that woman and the other children. I was confused and didn’t know what else I should do; I was only twelve years old. When the boat arrived in Jakarta, a man called Hasan Basri met us. I discovered that the people I had travelled with were all his relatives. I think Mr Budiato had organised beforehand for me to go with Hasan Basri. But he never told me that before I left Dili. Hasan Basri took us to Bandung where we stayed for one week in his house—there were about twenty children altogether at Hasan Basri’s house. Many of them were related to Hasan Basri; some of them were quite small and their parents were still in East Timor. A Javanese religious man, a Haji, visited us and Hasan Basri asked him to help find places for us in an Islamic boarding school, a pesantren. Some of the children were sent to Bogor and Tasikmalaya. The Haji took me and Nur Hikmah, one of the two children from Ermera, to Majalengka, near Cirebon in West Java. Her brother Manuel (Abdul Rahman) was sent to Tasikmalaya. He cried because he couldn’t be with his sister, but the Haji said it was better if we didn’t all stay together otherwise we would influence each other. I think Hasan Basri thought that we might run away together. At the time I thought that I was being taken to Mr Budiato’s home, because I thought that Majalengka was the same as Magelang. I was very disappointed.

In Majalengka I started studying at the junior high school and was there for three years, from 1999 to 2002. I lived with the teacher who taught Islamic religion. I helped in the house and I was able to go to school. The pesantren was run by Persatuan Islam (Persis). We studied a lot about Islamic religion and I became a Muslim. I was happy with the study and I wanted to become a Muslim. Before I went to Java I had not been baptized. While I was in Majalengka I had no information about my family. I saw on the television that East Timor became independent, in 2002. I felt sad because now I couldn’t go home and I didn’t know how it was with my father and my family. My host family told me not to be sad. He said that when I had completed my study I could go back to East Timor. They never said anything else about East Timor or about my parents.

I had never talked with Hasan Basri about Mr Budiato. So after the first year in Java, during the long vacation, I went to Hasan Basri’s house, but he had already moved. The following year during the vacation once again I tried to find him. This time I had heard that he lived in Sumedang, near Bandung, where he had established his own pesantren. But when I asked him about Mr Budianto he said he didn’t know him. During my third year in Majalengka, in 2002, once again I returned to Sumedang. There were about ten other East Timorese children who lived in various pesantren around Bandung who also had gathered at Basri’s house.

Hasan Basri gathered together all the East Timorese children staying with him to meet with the UNHCR staff. With the UNHCR staff was a policeman and staff from the social welfare department. Before the meeting he said to me, “Even if your father comes to meet you, you should stay here and not go back to East Timor. It’s better to complete your study first.” But he did not forbid me to go home with my father. At the meeting Hasan Basri asked us, “Who wants to return to East Timor?” Another mother had come with my father to collect her three children. The only ones who raised their hands were me and one of her three children. This woman, Domingas, was the older sister of Hasan Basri’s wife. No other children dared to raise their hands, but I think that if their parents had come to collect them they would have wanted to go back home. As the UNHCR vehicle was leaving, one of the other children ran down the road taking a shortcut leading out of the complex. He hid along the side of the road until the UNHCR car passed then stopped it and asked be taken home. At that time he was not attending school, just helping in the gardens. So there were three of us who went home. When I got back to Dili the UNHCR helped me so that I could begin school at the 30 August Junior High School in Comoro. But I was not happy there because I wanted to go to a school with Islamic teaching. So I moved to the An-Nur Junior High School run by the An-Nur mosque.’