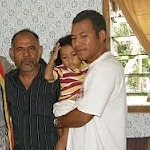 Elito’s mother, Elsa da Costa, died giving birth to her son on 19 August 1981. Lere gave his son the name Elito, ‘El’ from his mother Elsa and ‘ito’ from his name, Tito. After his wife died Lere could not look after Elito. When the baby was about six months old, Lere decided to send him out of the forest to Illiomar town. The child was discovered by Indonesian soldiers. In early 1982 Elita was adopted by Brigadier-General Sontono, head of the provincial police in East Timor from 1978 to 1982. He gave Elito the name, Bobi Rahman.

While he was still fighting in the forest, Lere always tried to find information about his son, including asking help with tracing from the International Red Cross. After independence he was able to take more concrete steps to trace his son. He heard that a Mr Yohanes cared for Elito in Illiomar and took him to Dili where he reported to the provincial police head Sontono. Sontono decided to adopt Elito and Lt. Gen. (ret.) Yunus Yosfiah, who has had long involvement in East Timor, witnessed or knew about the adoption. According to Tempo Semanal, an Indonesian doctor helped him trace Brig. Gen. Sontono, and Lt. Gen. (ret.) Yunus Yosfiah brought together the two senior military figures, father and adoptive father. East Timorese consulate staff in Bali also helped organise the reunion. Father and son were reunited in June 2010, after 29 years, when Elito returned to East Timor with his Indonesian wife Cici. Communication between the two was difficult, because they now have no common language.

Read about the reunion in Tempo Semanal, includes a short film.