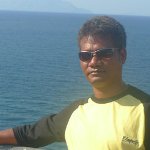 ‘From 1977 to 1980 I worked for a soldier relative who owned a building contract business in East Timor. In Baguia we llived in a building that had been constructed by the Portuguese. Sometimes at night it would be shot at by Fretilin, but we were safe inside as the walls were thick.

A Spanish priest living in Baguia cared for many orphaned or separated children. The children lived in anther Portuguese-constructed building close to ours. There were maybe as many as a hundred children in the care of the priest.

Vitor was one of these children. He was about five years old when I first met him. He was very thin and malnourished and often begged for food. I felt very sad when I saw how skinny he was, with an extended belly and red hair from malnutrition. I let him do jobs for me, in exchange for food.

I was told that Vitor’s father was Alberto da Costa. Alberto worked for the Indonesian military and often led patrols against Fretilin. This was dangerous, and eventually in 1979 he was killed by Fretilin, at the time when East Timorese place flowers on graves. I heard that his mother was Maria, and that she lived in a village about two kilometres from Baguia, with a younger sibling of Vitor’s. I never went to visit Vitor’s mother. It was too dangerous. I just heard this information, I don’t know any more than that. I heard some time later that Maria died.

Vitor didn’t want to go home or back to the priest, so when it was time to leave I decided to take Vitor with me to care for him and send him to school.

I asked the Spanish priest if I could take Vitor to Indonesia. I think he was glad because there were so many children in need of care. He signed a letter of surrender so that I could take Vitor. I needed this letter to prove that he was an orphan and in my care. Then I could apply to the social welfare department in Indonesia for funds to cover his school fees.

We left for Jakarta in June 1980. A friend of mine took another child called Juliano. Juliano was even more malnourished than Vitor; he had no hair. He was too sick and died on the trip home.

Vitor adjusted well to the situation in Indonesia. But he didn’t like going to school. I think it was because of his experience – the trauma and the fact that he was malnourished.

But everyone in our kampung knew him and liked him. He would help people if they asked him.

When he was older we were worried about his political activities. In 1996 our house was surrounded by security and Vitor was arrested and jailed for his pro-democracy activities.

Vitor is now a member of the Commission for Missing Persons and Victims of Violence, Kontras, based in Jakarta. In 2004 he returned to East Timor to try to find his family, though he had no contacts. This was his first visit home. He told a colleague at the Hak Foundation who tried to help him. They went together to Viqueque. Someone there claimed to be his uncle and that he looked exactly like his father. He said he knew his parents, and that when Vitor was small he had lived with his grandparents. His father died fighting, then his mother died. Another person told Vitor that he had an older brother who was adopted by a colonel in the navy in 1983 and lived in Surabaya. However, Vitor is not sure about any of this information and he has no way of verifying it.

See the BBC documentary ‘The lost children of East Timor,’ by Lucy Williamson in which Vitor briefly appears. The film refers to the problem in relation to adat customs and laws in relation to grave’s of missing children. East Timorese often made graves for those who were missing and performed the ritual ceremonies associated with death. In this way the families believed that the spirit of their child would return to rest with the spirits of their ancestors buried on their traditional lands. If a child assumed dead did return, further ceremonies were usually conducted to place them again in the world of the living.