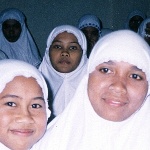 ‘I was born in about 1948 and started attending school during the Portuguese time. However, I did not go to school for long because the school was too far away and my family could not pay the school fees. Later I was sorry that I did not get an education and decided to make sure my own children were educated.

During the Portuguese time I joined the military, Tropas in Portuguese. Then I fought with Falintil against the Indonesians. In 1980 I was captured. I became a soldier’s helper, TBO, for an Indonesian soldier from West Java. In 1985 I married and moved to Lelalai, also in Quelicai.

I became a Catholic during the Portuguese time; to go to school you had to be Catholic. But after the Indonesians came here I decided to become a Muslim. Faisal Saleh, an East Timorese Islamic preacher who lived in our village, taught us about Islam. The soldier I worked for was a Muslim and he told me about the opportunity to send my children to study in Indonesia with Yakin institution. In 1993 I agreed to send my two daughters, seven-year-old Aminah and five-year-old Olinda, to Indonesia.

Education for my children

It was not because we had no food but because I wanted them to be educated. When I sent my daughters away we had four children. The other two children died after they left. Now I have ten children including Amelia and Olinda.

I took my daughters to Yakin institution in Dili. Faisal Saleh went with us. I waited with the children in Dili until they left by boat a few days later for Surabaya, East Java. There were 30 children altogether. I occasionally heard news of my daughters from other relatives, such as Alex Freitas Haryanto (Lukman), who had also been sent to study  in Indonesia. Once I got a letter from Olinda saying that the head of their institution had died and they had shifted to Bandung.’

In early 2004 Abidin Haryanto was able to speak by phone with his two daughters in Bandung, the first real contact with them in over ten years. He discovered that they were living in separate institutions. They told him that they wanted to return home but were worried whether it was safe. He said that he had carried guns for the resistance and also for the Indonesians, but guns were no longer necessary. His daughters returned home the following year. The pro-integrationist East Timorese, Hasan Basri, in Bandung tried to dissuade them from returning. Eventually their father had to go to collect them. His trip was facilitated by the Alola Foundation in Dili. 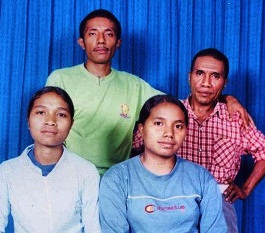