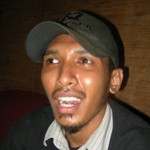 In March 1988 I was wounded during the fighting. My wife, Olinda Morais, and our 17 month old son, Benvindo, were with me in the forest. After I was wounded it became more difficult to care for Benvindo, and also we were short of food and water. So we decided to send Benvindo to Los Palos town to be cared for by family members living there. I attached a letter to him with his name and date of birth, though the letter did not say specifically that he was my child, because that would have been too dangerous. [Indonesian soldiers often sought the children of resistance fighters, especially commanders, to take them for adoption.] I also said that if my family could not look after him they should give him to the church. So my men took Benvindo to town and gave him to my father and younger sister.

I heard later what happened, including from my father who did in November 2003.

Colonel S. was the district military commander at that time. He learnt that the child of a Timorese resistance fighter had been brought from the forest into the town. He sent four soldiers to my father’s house who ordered my father and sister to bring Benvindo to the district military post, Kodim. Col. S. said to my father that Benvindo was not really his grandchild. When my father refused to deny this, S. threatened to cut Benvindo in two. So my father had no choice but to hand Benvindo over to S. One week later, two soldiers called my father to the military post. Col. S. said to him, “It’s better that I care for your grandchild. In the future he can help us all.” After that my father and sister were allowed to visit Benvindo but not take him home. They continued to see Benvindo quite often until 1989 when S. was transferred to Ainaro. At the end of 1990 or 1991, Col. S. returned to Bali.

In 1990 my wife, Benvindo’s mother, surrendered in Los Palos. There was another commander there at the time. An Indonesian soldier told my wife that Benvindo was in Bali with S. and on her behalf spoke with him via telephone. S. invited my wife to visit Bali, but she couldn’t go and also did not speak Indonesia. She asked for a photo of Benvindo, which S. sent to her, with details of where he lived. She asked the International Committee of the Red Cross (ICRC) to trace Benvindo, but nothing came of that. After 1991 she had no more contact with S. 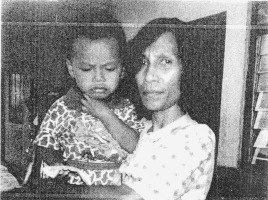 Benvindo's mother in 1990 with another child

In July 2003 by chance we heard that a relative of the commander who had replaced S. in 1989 was living in Dili. This relative helped me to contact the soldier who replaced S. The Alola Foundation in Dili also helped by sending an email to S. I heard that S. wanted me to write to him. I wrote a letter, and as proof I sent the photo of Benvindo that he had sent to my wife in 1991.

After that we spoke on the phone and S. invited me to come to Jakarta. I was a commander of a Timor Leste Defence Force, Falintil-FDTL, battalion so that was a bit difficult. I invited S. to come to Timor Leste, however, he didn’t want to do that. He thought the Timorese might be angry with him. So my wife and I decided to go to Jakarta ourselves. We left on 25 September 2003. S. met us in Jakarta and we stayed in his house for five days.

Just before we arrived in Jakarta, S. told Benvindo that his real parents were coming to visit him. S. had always told Benvindo that he was their natural son. By then Benvindo was about 16 years of age. At first it seemed to us as if Benvindo didn’t react at all. The second day we were there, my wife, who could speak a bit of Indonesian, tried to talk to him. On the fourth day his attitude seemed to change. I think he began to believe that we really were his parents. Before we left to go home, he called us father and mother and said to us, “Please make a place for me at your dinner table every day.”

During our visit, my wife cried a lot. S. said to me that men have different feelings. I guess he saw how difficult it was for my wife to have to go away and leave our son. Can you imagine how we felt? We had not seen him since he was 17 months old. Again S. told us we could take Benvindo back to East Timor. But he said to us that if we did Benvindo’s education would suffer, and he would blame us, his parents. I told S. that he should continue to care for Benvinodo and send him to school.

In May 2005 S. died, and in 2007 Benvindo, who now goes by his Indonesian name Shalih Zeromon Miranda Rahman) returned to East Timor where he now lives. A few translated quotes from an interview in 2009 with Radio Netherlands. Read (Dutch). “I didn’t have the faintest idea that my parents were not my parents. After I entered high school I began to ask myself why is my skin so dark compared with my older siblings, and why do I have such curly hair. When I heard the truth about my family I was incredulous. All at once I felt I was a tree that had been transplanted.But my fathers, who used to be enemies, through me they became friends. 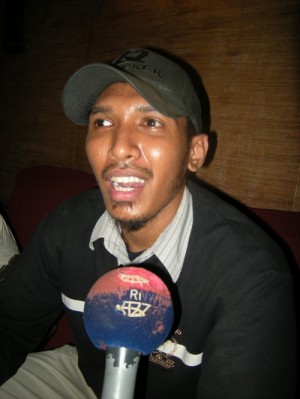