‘In October 1978 our family left the Matebean mountains where we had been hiding and surrendered in Luro, Los Palos district. Many members of our family were senior leaders in Fretilin, and this involvement was disclosed to the Indonesian military. My older brother, Vitor dos Santos Gandara, the father of Tommy and Sonia, and an uncle, Dinis Gandara, were detained. Their mother, Felicidade Lopes Gandara, and the children were taken to the district military post, Kodim, in Los Palos and held there. After three months they were all allowed to go back home. A day later Vitor and Dinis were collected by soldiers and taken to the military command post. Then about one month later they were taken out of town into the forest, along with Agustus Sanchez. Shortly after that soldiers came to our house and collected Sonia and Tommy and their mother. Felicidade was pregnant at the time of her capture. We don’t know exactly how the parents were killed.

After the disappearance of their parents, another uncle asked at the district military command for permission to take the children into the care of the family. However, this request was denied.
Instead an Indonesian civil servant, EBD, decided he would take the children to Indonesia. EBD worked as an advisor to the district administrator in Lautem from 1978 to 1980, and was also a lay evangelist for the Imanuel Protestant Church, which had established a branch in Los Palos. EBD obtained a letter of permission to take Tommy and Sonia away. The letter stated that the children were handed over to EBD by two members of the Imanuel Protestant Church in Los Palos. It was signed by the district administrator and the police and military commanders. The letter stated that EBD should raise the children as his own because their parents were dead and there was no family member to take on this responsibility. It also said that there had been no pressure exerted on anyone by the party removing the children. EBD took the children to Jakarta on 18 June 1979.

When I was studying in Dili I had a friend in Jakarta who found EBD’s address. In November 1991, I wrote to EBD. He replied giving me the addresses of my niece and nephew. Sonia was living at the Panti Asuhan (Orphanage) van de Steur, established by the Dutch and run by the Protestant Church, situated nearby his house in Pondok Gede, eastern Jakarta. Tommy had been adopted by a Mrs Lusi. I wrote to both of them, but only Sonia replied. In 1994 Sonia wrote saying she wanted to return to East Timor after she graduated from senior high school. So I traveled to Jakarta to meet her. The head of the institution in Jakarta did not believe that Sonia had any family. EBD had given the institution the letter of surrender but did not explain that the two children mentioned were siblings. When Sonia arrived there in 1979, she ran away several times looking for her brother, but the staff did not believe her story. The staff contacted the social welfare department to check with EBD whether Sonia could have an uncle. Then I heard how Sonia came to be living at this institution. EBD said that he had been asked by someone from Sulawesi living in Dili to find children for him to adopt. But when EBD turned up in Dili with Sonia and Tommy he didn’t want them, so EBD had to take them to Jakarta. EBD’s family didn’t want them; they had children of their own. Some months later Sonia was given to the van de Steur institution. Sonia had a good experience living in the institution, but she had no contact with East Timor. She was only told, in whispered tones, that she came from a an anti-Indonesian Fretilin family.

After I arrived in Jakarta in 1994 EBD told me that LS had taken Tommy. She had a difficult life because she had been a member of Gerwani, the women’s branch of the Indonesian Communist Party. She looked after Tommy well and sent him to a Catholic school. But when she died in 1983 he was passed between several members of her family. When I wrote to Tommy in 1991, his guardians did not give him my letter. At first Tommy didn’t want to return to East Timor with Sonia and me, but eventually he decided to join us. He was angry and frustrated that he did not know about his sister, who had lived close by for fifteen years without his knowing; also that his identity and religion had been changed after he left Mrs Lusi. We had to wait for several weeks for Sonia’s high school certificate to be issued, and during this time I told Tommy and Sonia all about their family in East Timor.

At the beginning of the new academic year, Sonia went to study at the university in Dili and Tommy to the senior high school in Los Palos. We still had family members who were fighting with Fretilin and we were closely watched by the Indonesian military. My younger brother, Aurelio, was interrogated numerous times and held in jail, mostly in relation to the return of Tommy and Sonia. Tommy was angry about the treatment of his family by the Indonesian military. The terror instilled in his family and the whole population shocked Tommy. While in Indonesia he heard nothing about the conflict and political tension in East Timor.

He could not adjust. He joined the clandestine movement and stopped visiting us during the day, so that we would not be in trouble. He then decided to seek asylum in a foreign embassy in Jakarta. He didn’t tell us about his plans. In 1995 he entered the Dutch embassy in Jakarta.
He went to live in Portugal and studied in Lisbon. Several years later we heard that he was seriously ill. Xanana Gusmão and Jose Ramos Horta helped us with the cost of bringing Tommy home; he was in a wheel chair. One week after arriving in East Timor he died, on 19 December 2001. He was only 25 years old.

Sonia also found it difficult to live in East Timor and returned to Indonesia. Now she is married and has a family there.She has regular contact with the remaining family members in East Timor. 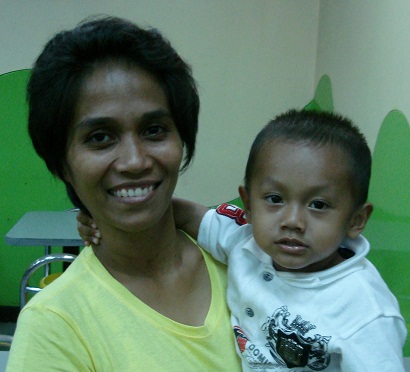 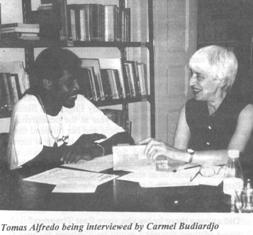