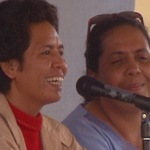 ‘I was born in about 1969 in a small village in central Portuguese Timor. My parents, Kulibere and Maria, were farmers and small-scale traders of sleeping mats, coffee, fruit and chilies. I lived with my parents and older brother Maumale near our coffee gardens. I remember running to meet my brother when he came home from school; he would carry me on his shoulders. After a gathering in our traditional ceremonial house, following the death of my grandmother, my uncle Armindus took my brother and me to live with him some distance from our parents. I don’t know why we had to go and live with him, possibly because of some problem in the family involving customary law. My brother didn’t stay there long as he knew the way back home. I enjoyed playing with the children of my uncle, Bitersa, Sucakina and Armindos, but I was not allowed to meet my parents. My mother seemed to be afraid of my uncle and would try to meet me secretly in the coffee gardens.

Then the Indonesians invaded in 1975. When the soldiers came close I fled with my uncle’s family and the villagers to the forest. In 1978 we were forced to surrender. The Indonesian soldiers made us move to Ainaro. There we lived with hundreds of other villagers in a large building near the church. During the day it was used as a school, but at night we slept there, guarded by soldiers. One Special Forces (Kopassus) soldier, was particularly nice to me. He gave me pretty clothes and sweets and used to take me for walks and to his office. My uncle always told me to hide if the soldier came. He said that maybe the soldier knew I was not his child and wanted to take me away.

One Sunday, it was just after my first communion, I was coming out of church with other children when soldiers who worked for the Special Forces soldier took me and put me into a vehicle. My uncle tried to stop them. I remember screaming and being very frightened. They took me to the nearby airfield and then in a helicopter. As we took off I threw the handkerchief my uncle had given me out of the helicopter. In Dili I stayed for some time in the soldiers’ barracks in Taibessi where there were East Timorese women, one of whom cared for me. On one occasion I tried to run away and find my way back home. After some time the Special Forces soldier was finished in Ainaro; he collected me from the barracks and took me back to Indonesia by plane.

I stayed with this soldier for five days, then he gave me to another family, also living in the Kopassus complex in Cijantung in Jakarta. But I was not happy. The soldiers should have known I would feel that way after they stole me. They did not think at all about how I might feel. This second family had many children of their own and the mother was sometimes cruel to me. After one year I met another woman in the same complex, and she invited me to come and live with her family. This family was good to me and I think of them as my own family. They sent me to school. They have six sons and the eldest child is a girl; I was in the middle. Now I am married and I have three children.

I always wanted to find my parents before I died. During the New Order period I didn’t dare to try to find my family. After 1999 [the end of the New Order and independence for East Timor] I asked a few people to help me, but I had no success.
In May 2004 I spoke with the CAVR, the Commission for Reception, Truth and Reconciliation in East Timor. The CAVR broadcast my request to find my family on its radio program, “Dalan ba Dame.” I told listeners everything I knew about myself, the names of five family members I remembered and where I came from.

My relatives heard my story. They had not forgotten me, the missing child in their family. They came to the CAVR, and soon afterwards the CAVR brought me to East Timor. After an absence of twenty-seven years I was back home.

I was so happy to meet my family. But I couldn’t talk with them, because they didn’t understand Indonesian and I don’t speak any language from East Timor. But I can’t go back to East Timor to live. I’m East Timorese, but I’m also Indonesian and I have a young family to look after in Jakarta.’

I want to return home … go home. Sure I am an Indonesian citizen, but I am an East Timorese. My parents don’t come from some unknown place, they come from East Timor. I need to go to East Timor, but that doesn’t mean I will leave my family, not at all. I’m not just interested in going home, as you ask me, I have to. It would be dreadful if I died and I hadn’t been able to meet my mother and my family. I hope that if you are my family and hear my story that you will contact me. I don’t want to be lost forever. The problem is that here in Indonesia, for me it’s another country. No matter how bad one’s country, we will want to go home. I don’t want to be left here. I have to find my family…

(listen to program in Indonesian)