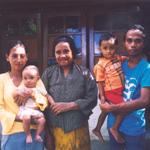 ‘I was born in 1978 in Tatilari, Uatolari, Viqueque. My father was the Falintil commander Manuel Menezes, with the code name Lafaek. When the Indonesians invaded, my mother and three siblings stayed with my father in the forest, but eventually he could no longer care for us. He found us a hiding place and left us there, returning every few weeks with food. In 1983 we were captured. We were taken to Uatolari, and my mother and my three siblings and I were held in jail for one year. Sometimes we had no food for a whole day.

The military then decided to send us to Atauro Island to try to force my father to surrender. However, my mother, a descendent of the ruling family from Quelicai, paid off the local military commander, babinsa, with watches and gold. She did sewing to provide for us. In 1984 my father was killed.

In 1991, when I was thirteen years old, I decided to convert from Catholicism to Islam, taking the name Mohammad Iqbal Alcino Menezes. I had many Indonesian friends who were Muslims. When I told my mother I was going to become a Muslim she became angry. But one day I just took her sarong [as a prayer mat] and joined in prayers at the mosque.

At that time I was attending the local state junior high school, where the same teacher taught art and Catholic religion classes. When this teacher discovered that I attended art but had stopped going to religion classes, he was angry. The Catholic priest was also angry with me. He was sure I had been bribed to become a Muslim, and even offered to send me to school in Italy.

The teacher who taught the Islamic religion class would not let me into his class. He was afraid there could be trouble for Muslims in the community if an East Timorese converted from Catholicism. An Indonesian policeman found out about my situation and tried to help me. The military commander in East Timor came by helicopter to Uatolari to try to sort out the problems I had caused by wanting to convert. The local Catholic priest had made a report to the governor, Mario Carrascalão, which had been passed on to the district administrator of Viqueque.

The military advisor for social and political affairs called a dialogue with the sub-district head, camat, of Uatolari, the priest, the school principal and the heads, kepala desa, of six villages. At the meeting they asked me why I wanted to become a Muslim. I could only say that it was what I wanted to do and that no one had forced me. The Javanese political affairs advisor told me that the law in Indonesia forbids children to change their religion without the agreement of their parents. I started to cry because of all the questions.

After that the staff at the mosque in Uatolari organised for me to leave my village to go to Dili. There I lived at the Islamic Yakin Institution and studied at the Islamic school run by the An-Nur mosque. Some people in Uatolari threatened to burn down our house, the mosque and the houses of Indonesian Muslims living around the mosque. For some time Muslims were not allowed to use a loud speaker or put up banners in public. Nothing happened in 1991. However, in September 1995, there were riots in many areas, and our house was burnt down, as was the mosque and Islamic school in Uatolari.

After three months, Yakin sent me to study in Indonesia. I left with a group of six students. We were given a special farewell reception attended by Abdullah Hamid, the head of Public Relations of the Department of Religious Affairs in Dili. He witnessed our oaths in which we promised to study and then return to work in East Timor. A banner was stretched across the road in Dili announcing our departure to Malang. Our group was actually unique among the students sent by Yakin. We were a bit older than average; at 13 I was the youngest. Children sent by Yakin were generally younger, and their departures were not made public. We were also especially selected on the basis of merit and sent to study at reputable institutions in Malang, East Java. We were also more successful than average. All but one completed a university qualification, several obtained masters degrees and one received a scholarship to study in Malaysia. While I was studying in Indonesia I kept in contact with my mother. The preacher, ustad, from Uatolari lived in East Java; he would visit us to collect letters and carry them back home.

After I completed my study in Malang I went to study at the IAIN, the State Islamic University, in Jakarta. In early 2002 I decided to return home for the proclamation of independence on 20 May. I led a group of ten East Timorese Muslims, some only children, who also wanted to be there for the celebrations. We travelled overland, but had trouble at the border between West and East Timor: pro-Indonesian East Timorese, including ex-militiamen, tried to prevent East Timorese crossing into East Timor; however, we managed to sneak past them.

In 2004 Iqbal Menezes was Director of the United Islamic Centre of East Timor.