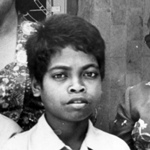 This photo was taken in 1977 when Henrique in a group of twenty East Timorese children visited President Suharto and his wife at their home (Photo: Kompas 5/9/1977).

Petrus Kanisius tells the story of the disappearance of Henrique Araujo

‘Not long after this a reporter from Suara Merdeka, the Central Java newspaper, came to interview the sister. Maybe the sister was trying to give attention to our situation, because the article mentioned that the government was responsible for us. The news article also said that the East Timorese students living there ate plants and roots, food for animals that Javanese never eat. When we saw the article we were really mad with the sister for saying that we ate animal food, and also with the reporter for writing it like that. We refused to go to school for one week.

Five students could stand it no longer and ran away. They got on a bus but had no idea what their plan was; also they had no money. When asked by the conductor, they said, “We’re the president’s children,” expecting not to pay. Because of the recent publicity in the press, many people had heard about the “President’s children.” The sisters had contacted the police and the bus staff had been told to look out for them, so they didn’t get very far. However one of the five, Henrique Araujo from Same, disappeared. I was upset about Henrique, but there was no effort to find him. Without telling the sisters, together with a few others, I went to the Department of Social Welfare and complained. The staff just replied, “Let him get lost. Die. Don’t bother looking for him.” We wrote protest letters to the parliament (DPR), also the upper house (MPR) and the president, but nothing ever happened, and I have never heard about Henrique since then. The authorities just didn’t care. I felt that our lives had no value in their eyes. We suffered in East Timor, then we were sent to St Thomas where we also suffered, and to this was added even a greater suffering, the loss of one of our friends.

Henrique’s disappearance made us think about our situation. We now understood that no one would look out for us and we agreed together that we had better do what they asked—work, study hard and not make demands—otherwise we might suffer a similar fate to Henrique. Several older East Timorese university students studying in Yogyakarta came to visit and talk to us, Domingus Maya and Armindo Maya. That helped, and the situation became a bit better. At least, when we got home from school we were allowed to eat before going to the gardens. The sisters also decided that our group would split up, some going to Yogyakarta, Surabaya and Jakarta. I stayed in St Thomas. Everyone worked hard, but the sisters still did not acknowledge that East Timorese students were also clever.

We didn’t have any further contact with the government. Lots of people, including rich people and even film stars, came and asked if they could adopt us. But the sisters told these people that if they wanted to help they should make a donation to St Thomas.’