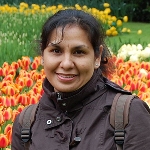 ‘My parents handed me over to an Indonesian soldier when I was 6 years old in 1977. They took me to Java and raised me as their only child. As their only child, they loved me dearly and tried to provide me with the best possible education (until university), despite their limited financial situation. However, my biological mother asked my eldest brother, Juviano Reibero, to search for me. My adoptive father sent a letter with my photo to my parents in East Timor, but after that first letter there was no more communication. It was the last news that my family in East Timor heard about me. In 1985 I moved with my adoptive parents from Java to North Sulawesi. When I was in my third grade of Senior High School (in 1990), my older brother, Juviano, managed to track me down in Sulawesi and he sent a telegram to my adoptive father. At that time, my adoptive father asked him not to contact me until I had finished school. He said he was worried that this news might distract me from preparing the final examination. But after that there was no more contact.

Seven years after arriving in Sulawesi, we all moved again to Java after my adoptive father suffered a stroke and decided to retire early. In 1992, I began studying at Satya Wacana Christian University (Universitas Kristen Satya Wacana/UKSW), Salatiga. In Salatiga, I met many students from East Timor. Surprisingly, although I could not remember my parent’s name, I could clearly recall that I had an older brother named Juviano Ribero. Because I remembered his  name, I was finally reunited with my family in East Timor. I told my Timorese friends that I was adopted and I only remembered that I had an older brother named Juviano Ribero from Los Palos. It turned out that one of them had met my brother and knew his address in Jakarta. This friend then sent a letter to my brother and asked him whether he had a sister who was adopted by a soldier in Java.

Based on this letter, my brother Juvi came to Salatiga and we met for the first time after being separated for 15 years. My brother then tried to approach my adoptive parents in Java and finally gained their trust and permission to take me back to East Timor to meet my biological family. My brother assured my adoptive parents that he would not separate me from them. He only wanted to re-connect me with my family after our communication had been discontinued all this time.  In 1993, I was finally reunited with my biological family – the nuclear and extended families are really large. It was a beautiful, touching and wonderful moment.’