On 3 September 1977, twenty young East Timorese children between four and ten years of age were taken to meet President Suharto at his family home in Cendana Street in Jakarta. The president and his wife took time out of their busy schedules to personally host them. 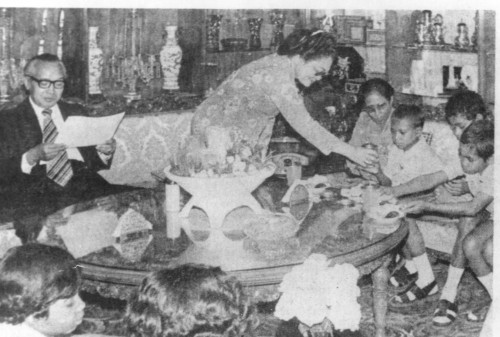 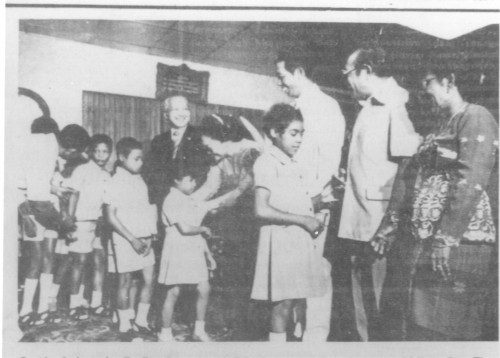 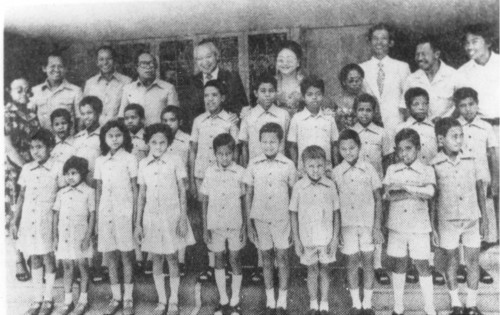 Photographs show the children seated in the Suhartos’ private home, with Mrs Tien, the president’s wife, helping them wash their hands and serving them food. She felt a ‘motherly’ sadness for these little children who had no one to care for them and had to travel so far from their own environment to be looked after, while the president gave the children advice as a father would his children.

This meeting with the children occurred shortly after Suharto offered an amnesty to the East Timorese Fretilin resistance, during his state address on Independence Day, 16 August 1977. Suharto symbolically extended the invitation to all East Timorese to be part of the Indonesian family by taking these young children into his home. The children became, on behalf of East Timorese, putative members of his family and by extension, of the Indonesian family. Petrus Kanisius, one of the children, recalled that after this meeting they were often referred to as the ‘President’s children’.

Suharto wanted to hear from the twenty East Timorese children themselves that they liked visiting Jakarta and were happy about going to live in Central Java. They had been coached to sing a song for him in Indonesian, to that effect—’We’re happy here, we’re happy there, everywhere we’re happy’. Petrus Kanisius and his friends were excited about the visits to the wonderful attractions in Jakarta, such as Indonesia in Miniature Park, Taman Mini, and the delicious food laid out for them at the palace. However, when he left the concentration camp in Aileu, he and his family had thought that he was being sent to school in the ‘big city’ of Dili. Instead he and the other children were suddenly in Jakarta, overwhelmed by this huge city with its strange language and customs, and there had been no time to say goodbye.

The papers reported that these twenty East Timorese children were orphaned because their parents were killed by communist Fretilin. Ten years after the 1965 anti-communist killings in Indonesia, Indonesians still believed that communism posed a threat. Hence, the children evoked a sympathetic response from Indonesians who felt they needed to defend their “brothers” there who were suffering under communist terror. However, this group of children had been collected from the concentration camps in East Timor, forced there by Indonesian military aggression—including one child who had witnessed his parents killed by Indonesian soldiers. Another group of children sent to Indonesia by Suharto’s Dharmais Foundation better approximated this Indonesian description.

By describing this particular group of children in this way, Suharto and other officials manipulated the truth about the children just as they manipulated many aspects of the truth about the war in East Timor. The young children were made to embody the New Order myths and co-opted as part of the regimes propaganda effort to justify and gain support for its action in East Timor. Most Indonesians nationalistically supported the decision of their leaders to engage in military action in East Timor.